Posting about the Team Peach piece reminded me that I haven’t posted about this other quickee either.

I actually started this in the summer of 2009 – while we were waiting the interminable wait to move into our new home. When we finally got the keys (two years ago last weekend), we were so busy getting it sorted before moving in at the end of the month, that this got put to one side and forgotten about. I found it again a few weeks ago and noticed it only needed about two dozen stitches to finish it. 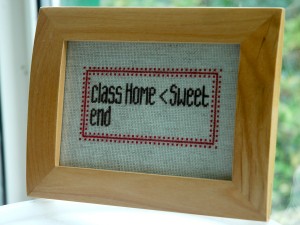 It is the equivalent of “Home Sweet Home” in Ruby, John’s preferred programming language (or at least one way of expressing it in Ruby: we had a long chat back in 2009 about the best way to do it). The border is supposed to represent rails, as in Ruby on Rails, influenced by the RoR logo, but I think it might make more sense if the “rail” was thicker or if there were two rails — I might modify it in the future. 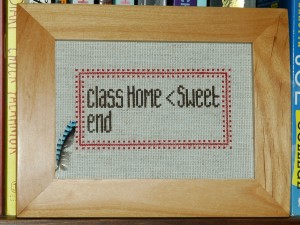 It’s currently living on a bookshelf in our dining room but will take up it’s rightful place in the porch when the porch has a roof again.

(John found the feather on a walk earlier in the year. It has no programming significance.) 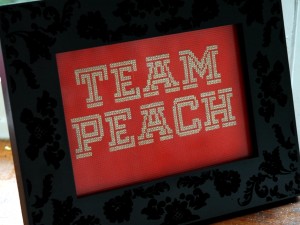