(Hunting with the English Springer Spaniel)

3BT – pretty hound, registering them, acts of kindness (and inaction)

1. Lily sticks her head around the doorway, ears raised. She looks gorgeous against the flat lime wall. I enjoy the moment and the colours before going to get my camera but she’s moved by the time I get back. I get this snap a few seconds later instead by way of compensation: 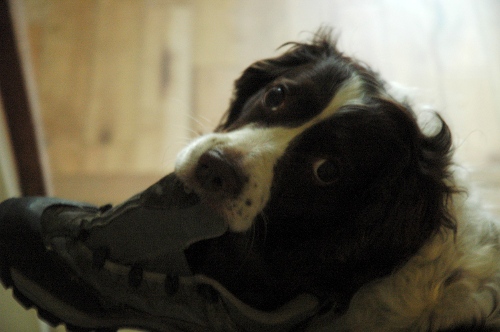 2. Laughter and jokes with each little friendship group is such a nice way to start the session that I decide to do it more often.

3. After Clare linked to it in her Three Beautiful Things post the other day, I spend the dead minutes of the day – waiting for tea to brew, waiting at the bus stop and on my journeys to & from the theatre – reading stories from the Acts of Kindness on the Tube series. There are big gestures but as Clare says, it’s amazing how the smallest things really matter to people – the gift of a tissue, a bottle of water or a helping hand down stairs. It puts me in a good mood for the whole day.

(Well, it does but with a tingling of regret at the back of it – a not so beautiful thing. About a month after I moved to Leeds in 2000, there was a giant music festival in Roundhay Park — BBC Radio 1’s imitation of Love Parade. It was giant because it was promoted nationally by the main national pop radio station and because it was free & ticket-free too. I don’t know how many people they expected to turn up but it was massive – attendance of around 300,000 people (for comparison, Glastonbury is between 130,000-150,000 these days and the City of Leeds had a resident population in 2001 of around 700,000). The city centre was overwhelmed – nearly a third of a million people arrived in the city centre without warning or adequate transport arranged. I can’t remember how we got to Roundhay Park in the end and remember little about the time there*, but can recall a fair bit about the chaos in the town centre and the streets down through Harehills when it was time to go home. The thing that sticks most clearly in my mind though is what ties it back to today’s post: outside Leeds Railway Station’s main doors, in the middle of the hyped up swarm, I saw a middle aged lady sat on a suitcase. She was bewildered and scared, tears streaming down her face while trying to make herself as small and invisible as possible. I wanted to go to her – to help her with my shiny new knowledge of the city – but I froze. I hadn’t properly identified my glaring social ineptness and found it even more difficult to deal with than I do now. I just watched from the other side of the street and then myself was swept away by whatever took me to the east of the city to the park. Needless to say, as that is my main surviving memory from the day, my inaction must have scarred me deeply and I’ve made a little personal vow to not leave anyone alone like that again. I’ve worried about her for 12 years now but actually, having read those many stories of kindness on the Tube, I’m more hopefully that a braver, less socially broken, person came by not long after me and helped her out. I really, really hope that was the case.)

* snapshots: not having any phone coverage – the first time that had happened to me because of too many people around; my friend Emma telling me that the trees on the horizon looked like broccoli; the dusty former grassy giving way to tarmac and not understanding why (there is a road through the park); and, standing at the top of the hill looking down on the endless swarm of people.

3BT – begins with the dog, tree, brickwork, and it ends with a dog story too

3. Neat new pointing in between the rough old stones.

4. As I sit on the cold concrete block outside the abandoned building, I regret changing our plan: instead of getting the bus home as usual, I suggested John (and Lily) pick me up on the way home from his mum’s (her grandma’s) house and we can go for a walk in Bingley. I have to wait more than half an hour but it’s worth it in the end: we have the park around the river to ourselves — well, except for some ducks. Lily paddles in the water and we walk around in the fading evening sun, catching up on our afternoons apart.

3BT – not how I thought but better, fairly furry, cheesy grins all around

1. I wasn’t convinced about the colour of the tiles when they were in the box but up on the wall, after hours of fighting with adhesive and tile trim, I love it. It’s vaguely reminiscent of the tiling in a Victorian public toilet – but in a good way.

3. The bone Lily-dog is holding pushes her upper lips in such a way that she appears to have a wide, goofy grin. I laugh and it looks like she’s laughing too. :)

Lily in the winter sunshine … doing what dogs do

I know, I thought, I’ll take a picture of the dog looking pretty running around in the hazy winter sun. I raised my phone and clicked.

And it was at that moment that Lily decided to do a poo. 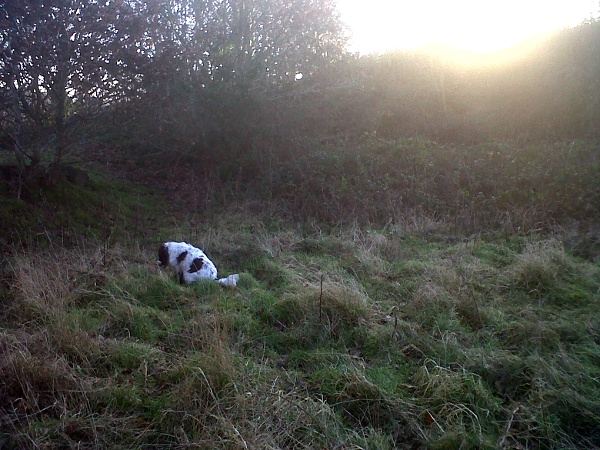 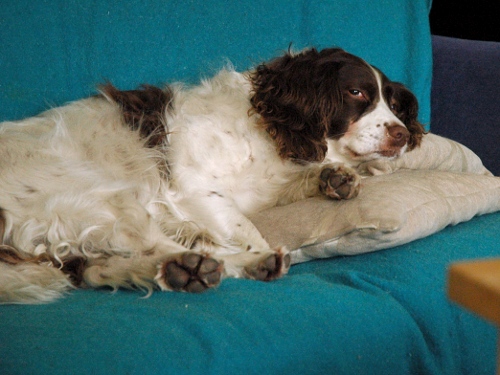 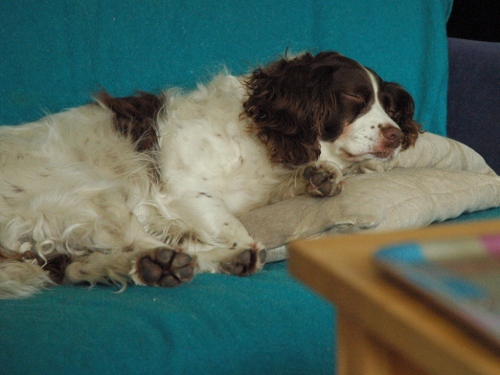 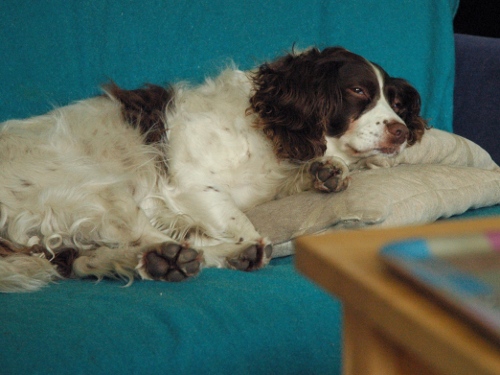 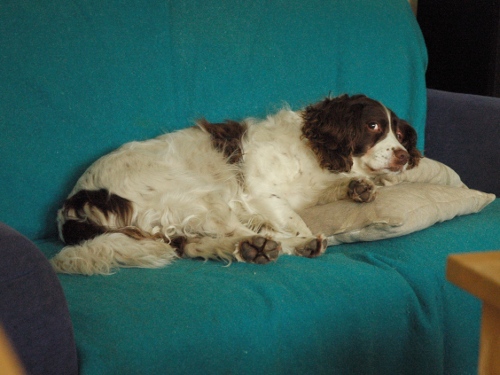 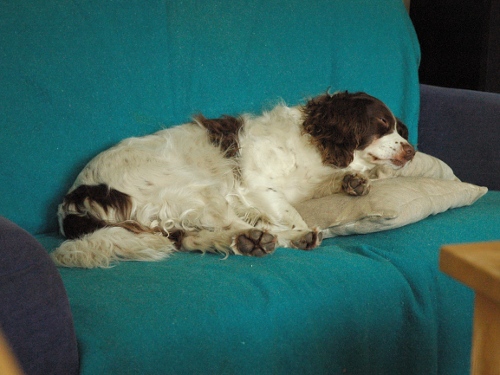