I’m planning to read (or re-read) and review a number of graphic novels & comic collections in 2016. The reviews probably won’t be quite as in-depth as some of my others but anyway, this is the first:

Despite watching the film countless times over the years, I realised towards the end of last year that I’d somehow managed to only read a few chapters of Ghost World

– I’d borrowed the book from the library back in the day but not got through it — which is odd because it’s pretty light.

It’s rightly acclaimed for its depiction of the contradictions, desires and downright scariness of adolescence, especially as the subsequent move into adulthood: two girls out of step with the rest of the world, clinging to a straining friendship because the future is even more terrifying alone.

Remembering my own teenage/university years, I heavily identified with the girls’ revulsion towards their contemporaries and the vapid world around them – the disgust secretly mixed with envy: how do people like the nauseous Melorra have their lives figured out while they/I’m still utterly lost? (Clue: in real life at least, they’re usually utterly lost too – they’re just better at faking it than I was/am.) On that note, I also appreciated Enid’s reluctance to commit to one aesthetic: 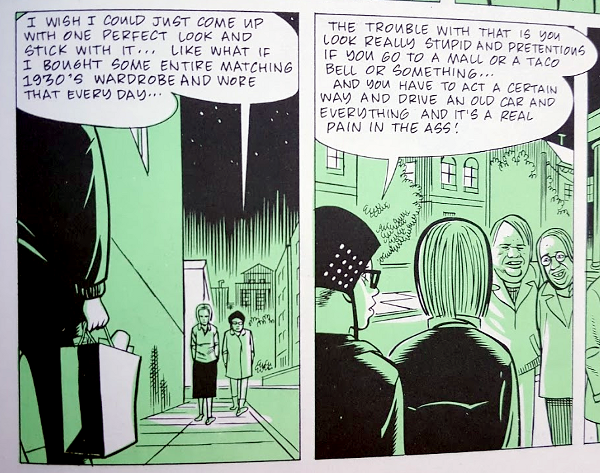 (I’m still envious of people who have that type of certainty of mind. I also enjoyed how Enid is judgmental of others adopting subcultures at a surface level – to distance herself from the fact she’s overtly doing the same.)

The girls, but especially Enid, are pleasantly unlikeable, or rather they are sympathetic characters who do unsympathetic things to continue to distance themselves from the rest of the world. They dick with strangers, are often openly obnoxious to those in closer proximity and even kick out at each other – but at least they, sometimes, have the decency to feel bad about it (sometimes in the moment, and sometimes wrapped up in their wider self-loathing). They become bitter and angry because it’s easier to do that than face up to themselves.

We see the world – as much as we see it at all – through the girls’ viewpoint. We learn nothing of note about the (presumably small) town in which they live, or about the vast majority of their lives up to that point or hopes for the future: we learn how Enid lost her virginity but not why Becky seemingly lives with her grandmother, and we learn that Enid takes an entrance exam for college, but not whether or not she actually wants to go, or what she might study there (possibly because she doesn’t know herself). In addition, there is a timeless quality to the book in general – it could take place at almost any point from, say, the early 1990s up to the present day. This tight view is perfect to illustrate their self-absorption – though you can tell they almost feel bad about this too, or at least are conscious that it’s not great to be so apathetic.

I had a note about not enjoying some of the artwork, especially that of the male characters – they’re less “cartoon” with more detail and shading accentuating fairly repugnant features, compared to the bold smooth lines of Enid & Becky – but considering the story as being told from the girls’ point of view, these depictions make sense — as does the fact the side characters are fairly flat in terms of characterisation: the girls see the men (either their ‘friends’ or strangers) as vile caricatures because they have no interest in seeing them as more fully formed humans. (And, in the case of John Ellis, the character pushes that angle himself: as is noted towards the end of the book, he obsesses about the offensive in order to distinguish himself from everyone else.) That said, it would have been nice to have had some more ‘good’ or at least more fleshed out characters with whom the girls could interact, so that we could see more sides of their personalities. (In Ghost World [DVD]

“>the film, Enid has the Steve Buscemi character, Seymour, to play off: he’s seen as (and considers himself to be) a loser in many ways, but he’s less of a phony than most people in her life, and it’s interesting to see her play off him – and see a possible future for herself if she remains disengaged).

Overall, that was my main criticism of the book: that there wasn’t enough of it. It felt like it luxuriated in creating their small, bitter world to start with but the last two or three chapters rushed by: even without answering the better-left-unanswered ‘what next?’ question, I think there was room to explore the decline of their friendship and some of the tensions over Josh. (I also thought the Clowes cameo subplot was a bit of an indulgence given the slight nature of the limited chapters/thin final volume.) It feels for a bit of a cop out to set up these difficult characters, then just leave everything hanging at the end.