I achieved just two of them. TWO!

I am, understandably, a bit disappointed with that but as I mentioned throughout the year, the goals were supposed to put me on a journey rather than being the destination.

The two goals I did achieve (“To make a meal using only ingredients I’ve grown, raised, caught or killed myself” and “Learn how to make sausages”) were part of my overall desire to adopt a more simple, DIY life and I think that’s going wonderfully in the right direction. The making an outfit goal was part of that – and while I didn’t meet that goal, I did learn to spin wool, I experimented with dyeing yarn too and I also made some attempts at sewing clothes. The fishing goal was a failure due to procrastination and disorganisation – it’s on the list for next year and by-huff-or-by-puff, it’s going to happen.

The last two (“Climb a mountain or at least a jolly big hill” and “Participate more in the real world”) were in an effort to get me out from behind my computer and/or off the sofa. With Lily’s arrival in March, we started walking in “our” woods every day and most weekends (one or both days) see us heading further afield for strolls. That’s a good thing. I didn’t realise what a small-talk-instigator dogs are either – I think we know considerably more people (and their dogs) than if we’d gone out wandering in the woods on our own. Another good thing. Also, while it’s not green-related, I get out and meet people regularly through my work & play at Bingley Little Theatre – this year I’ve helped with two productions and summer showcase, as well as helping teach two classes a week. A frickin’ ace thing.

I have less-than-almost-ever interest in learning to drive. I’m not scared or anything, there just doesn’t seem a lot of point to it. Occasionally I think it would be useful if I could drive somewhere instead of having to enlist John but I don’t have enough sustained motivation to start learning again – and finding the time/money is another issue. I’ve also rethought my position on my travel goal – as I wrote in my November goal update, the way we’d have to do it feels too much like consumerism, to much to have and not to be. So I’m not bothered that I haven’t achieved that either.

The novel thing and the Ruby thing are probably my biggest disappointments – nothing other than procrastination/excitement about other things stopping me there really. A revised version of the novel one will be on my goal list for 2011. The Ruby one probably won’t be – but that’s not to say I don’t want to learn — I think I will love programming when I get into it – I just need to find a new book/teaching method first.

So that’s it for 2010. The goal achievements were worth the disappointments. The rest of my life was similar – had some awesome wins, had some dark spots, some new starts and left some things behind.

Team Peach expanded (Lily-dog and the chicken tribe) but sadly contracted too (we lost Carbon). I’ve eaten a helluva lot of good food, read many many good books (highlights: lots of stuff from the first half of the 20th Century including ‘Miss Pettigrew Lives for a Day’ by Winifred Watson, ‘Good Evening Mrs Craven and other stories’ by Mollie Panter Downes and ‘The Death of Grass’ by John Christopher), learned a lot of new stuff and laughed loads.

Warm-up, someone made some effort, starting the sauce

1. Around the time of her usual lunchtime walk, her tail starts wagging even though the rest of her is dozing on the sofa. “It’s a warm-up, like stretching,” I tell John.

2. The boxes are coloured to indicate who they’re for – the big cat, the little cat or the dog. The colours – rich raspberry, burnt orange and cool purple – are contrasting complements, and until I see them together in the bag, I didn’t realise spot-on flea treatment packaging could be so pretty.

3. It takes a while for the smell to reach me – the sweet scent frying onions and the garlic – but when it does, I suddenly develop an appetite.

1. The sharp snap as I break the twigs.

2. The arrangement of the washing on the line looks deliberately composed. The duck-egg blue of the bath towels, the washed out mid-blue of the dog ones and the soft turquoise & cream of the tea towels all coordinate while standing out against the leafy green backdrop.

3. A productive day and completing a goal – a meal made entirely from stuff from our garden. 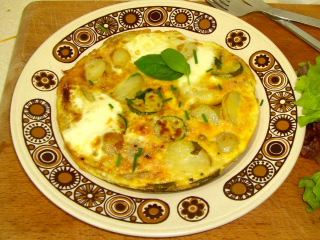 This was my dinner this evening – courgette frittata with side salad – and it was made entirely using things from our garden (with the exception of the wild garlic pods – some were from our garden, others from further into the woods). 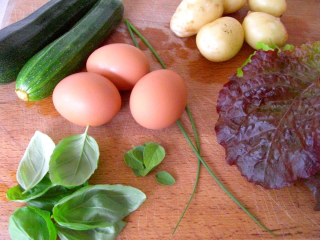 Ingredients:
– courgette (although I only used one in the end – could have used a bit more for flavour though)
– new potatoes
– pickled wild garlic pods (not in picture)
– eggs (from yesterday, needed beating better hence the egg white bits)
– basil (grown from seed this year) & oregano (had for a few years)
– salad leaves (lollo rosso)
– chives
– and, ok ok, a little oil for frying the courgettes – a small cheat ;)

It could have used a bit of salt & pepper for flavour but other than that, was pretty damn good!

In honour of my 31st birthday, here are 31 beautiful things from today. (Cross posted to my main blog.)

1. I’d gone to bed before John and it’s after midnight when he comes to bed. I stir as he climbs in next to me and we have a sleepy exchange, the content of which I can’t remember now. He finishes with a whisper of “happy birthday by the way” and I remember that.

2. The next time I wake up (well, it’s not the next time I wake up because I had to get up for a wee just after dawn and Carla woke me up again an hour after that, but for poetic licence, let’s say the next time I woke up), John’s stood in front of me holding something in his hands. I move the pillow from on top of my head and grab my glasses to see what it is – two carrier bags, containing chole & puree, and barfi & other sweet treats. Yum!

3. I notice that without its dust cover, my book matches the bedsheets.

4. Lily woofs and helicopter-tails around the room when George arrives. She brings him shoes and circles his legs. Lily loves George.

5. I sit on the stately patio chair – which I call “my birthday throne” – while John and George (unsuccessfully) attempt to split the giant logs. We laugh a lot at their efforts.

6. The poultry spice – a “mineral supplement and general tonic” – smells like an old fashioned sweet shop.

7. After introducing himself, the voice on the phone says simply “I’ve got good news”. His news should save us anywhere between £6,000 and £10,000, and months of coordinating building work. Very good news!

8. Despite being washed many times, my fingers still smell of the breakfast curry.

9. One of the scaredy cats from next door half-raises his tail when he sees me. When I’m feeding him & his brothers, he likes me a lot and we have big hugs but outside of those times, he’s a shy boy. The half tail raise is progress.

10. My mum breaks a 31 year tradition by buying me a birthday card without a cat on the front of it (it had a Lily-esque springer on it instead.) 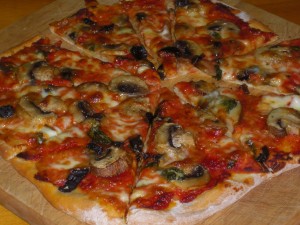 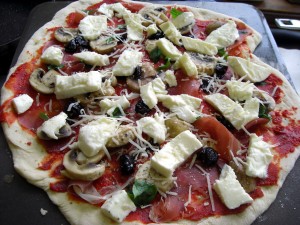 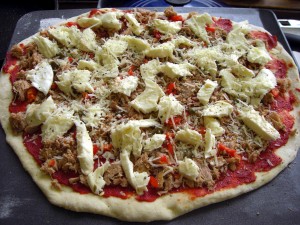 14. I add a new simple living blog and a new comic to my feed reader. It’s inspiring and invigorating to find new fellow travellers – but a bit of silliness is always welcome too.

15. The cats stand at right angles to each other as they drink the leftover tuna water. From directly above, the white rims of the bowls look like halos.

16. Splashes dribbling down the side of the pan produce a burning smell but every now and then, the sweet comforting warm milk smell breaks through.

18. I squeeze the butter muslin and the curds form into a pleasingly round sphere. When I unwrap it, the cheese will be imprinted by the fine check of the fabric.

19. It’s dark – overcast and under many layers of tree cover – but still the grass and ferns glow an unearthly green.

20. The rain is heavy and sonorous but not unpleasant.

21. “Listen,” I tell John after directing him into the bedroom. A wet roar drowns out everything else but it’s not rain on trees like we both first thought: it’s the beck, flowing more heavily than it’s done in months. Just a few minutes earlier, we’d step through it on the stepping stones left by the last flood. Next time we cross it, we’ll have to navigate it anew.

22. Amongst the lines of light and shadow, the black cat sleeps in a ball.

23. The other black cat is asleep in the dog’s bed. I find him there when I get out of the bath. He looks dramatic against the neutral cushion and pastel blanket. He blinks at me as I dance around the room.

24. I don’t think I’ll ever tire of playing hide and seek with the dog. I can see why cats do it now – hide when they know they’ve not been seen then jump out. I don’t bat with the victim with my paws though, I give her a hug instead.

25. It’s at this point – after I’ve inserted an earlier beautiful thing and had to renumber the rest about five times – that I realise it would have been easier to use an ordered list (<old>) instead of doing it manually. I don’t know if the pay off is worth it now though. Oh, and I realise this isn’t really a beautiful thing but do you know how hard it is to come up with 31 of them? Even on a rather jolly pleasant day? It’s hard! ;)

26. Now we’re flanking her on the sofa, there isn’t quite so much room to stretch out length ways so she stretches across it instead. Her head dangles over the edge, her tongue lolling, her lips flapping.

27. I savour the parma ham. It feels like it’s melting on my tongue but it isn’t. I think if I could only eat one type of meat again for the rest of my life, it would be parma ham.

28. I point John at the most recent Hyperbole and a Half comic about her dog. He laughs loudly as the dog twists its head further in an attempt at understanding.

29. We watch “The Counterfeiters” – the next in my short, impromptu German language film festival. The subtitles aren’t quite right for some reason and the mistakes remind me of child language acquisition.

30. Carla sits on my knee throughout the film. I stroke her, she purrs.

31. We look at the dark window – not at the world outside but at the rooms behind us. It makes the living room seem new again and through the doorway, the dining room looks so lovely that I can’t believe it’s ours.

1. My free photos arrive. Each brings a new smile to my face: people, animals, places I’ve been.

2. Boron swaggers over to me and says he wants a hug. In one movement, I pick him up and roll him onto his back on my knees so his rabbit feet are in the air. I kiss his head and tickle his exposed fluffy belly. My wrists reverse, rolling him back upright and put him back on the floor. As he swaggers off again, content and purring, I remember how he once bit my finger through to the bone.

3. The spices are almost invisible in the flour but the fish turns a vibrant turmeric yellow on contact.