I’ve not been blogging enough recently, for various, uninteresting reasons so inspired by Lynsey of Swirly Arts, I’ve decided to throw myself back into the blogging deep end and take part in Blogtoberfest 2012 to try to remedy my “not blogging” problem – posting every day in October, one way or another, on one site or another (preferably more than one!).

Some of the posts will probably be short/picture heavy but I am going to try to include a lot of “makes” in the month, because I’ve not been making stuff enough lately and I’m missing it. Most of them will probably end up on The Really Good Life or How Can I Recycle This? but as this is neither “good life”y or recycled, I thought it wasn’t really appropriate for those sites. It is though, fittingly, a little swirly ;) 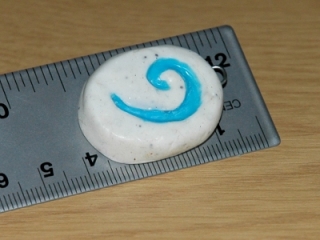 It’s a World of Warcraft “hearthstone” – a little thing you click in the game every time you want to return to your in-game home. I’ve been meaning to make a “real” one to go on my (house keys) keyring for a while but didn’t get around to it until today. The bits are meant to be there – it’s Fimo “Effect” which is supposed to look a bit like stone/marble. It needs to go in the oven to bake hard, but it can wait until we’ve heated up the oven for something else.

It’s very small and very geeky but it’s a start!