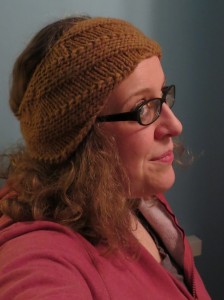 Depending on how you look at it, this is either one of the quickest or one of the slowest makes I’ve ever done.

My ears were FREEZING I got back from my walk with her majesty Lily of Stink this afternoon. No surprise really — the hill and the horses’ field were both still covered in the morning’s frost — but unpleasant all the same. I decided to look for some ideas for crocheted (or stitched) ear muffs but after looking at various options on Ravelry & Pinterest, I decided I’d prefer a band-like ear warmer instead of muffs. “Hmmm,” I thought, “I could knit a pretty swirly one easily enough.” Then I remembered the swirly beany I started making last year? the year before? I ran upstairs and grabbed the half finished hat from where it was gathering dust on top of the chest of drawers in the bedroom – and lo, it was just about the right size for ear warmer.

I had left my hat mid-row so it took me a whole 12 minutes to finish off that row, cast off and put a couple of stitches in the back to double over the back bit (which ever so conveniently gives it a bit of an ear shape at the front). So it either took me 12 minutes to make this or 2 years. Ahem.

Even if I had started it from scratch this afternoon, it still would have been a quick make – that’s why I started making it as a hat. I probably will make a full hat version later this winter – probably in a less sludgy colour – but this will keep my ears warm in the meantime and tuck neatly away in my pocket when I don’t need it. Double yay.