For an improv exercise at class on Wednesday, I put together a list of my favourite quotes from our recent production of The Winter’s Tale – and a little procrastination turned that list into a word cloud.

I started using Wordle, which is great for occurrence-based clouds: for example, this is a Wordle cloud of our Winter’s Tale script: 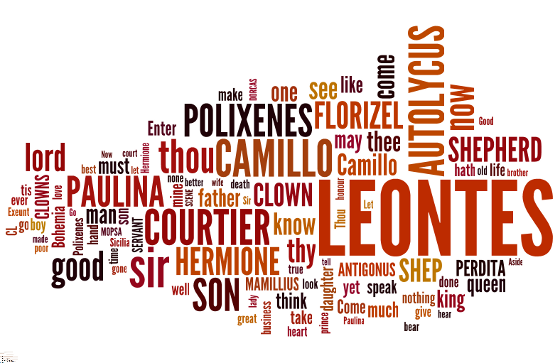 (It is, I think, a cloud of 100 of the most frequently occurring words in the script, excluding common English words such as the and and. It’s mostly character names and other words that aren’t actually spoken but occur a lot for obvious reasons (eg scene and exeunt).)

However as each quote only occurred in my list once, their version of my desired quote cloud was a little flat – all the words one size and no word wrapping so there were a lot of very long lines. So I decided to do it the old fashioned way in Inkscape: it was a lot of fun, like doing a very nerdy jigsaw :) 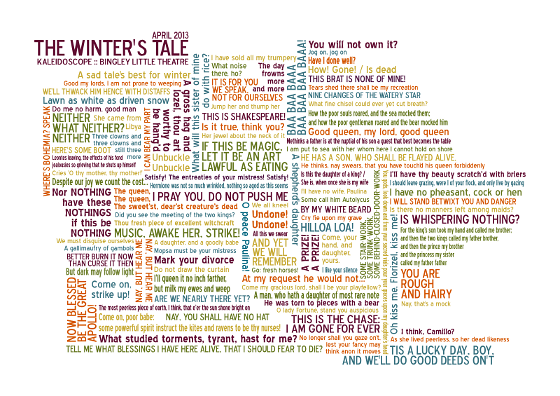 (Click pic to enlarge or for an even bigger version, Winter’s Tale quote cloud PDF )

(As with most Shakespeare productions, we used the original language but edited the script to reduce the length, add additional parts and make it more accessible. We also added a group of clowns that both narrated and took part in the action: they, by and large, spoke in modern English and some of them … weren’t too smart, hence quotes such as “This is Shakespeare!”. We also had a puntastic song at the sheep shearing festival that was made up of “baa”s ;) )

I suspect I have made some typos and could improve both the general composition and alignment if I threw some more time at it but I’m rather happy with it as it is. Plus, it beat doing actual word today ;)