I’m taking part in Blogtoberfest 2012 across my various different blogs – at least one post a day for the month of October to get me back into blogging regularly again. I’m keeping a (growing) list of those posts for anyone interested!

A bit like yesterday’s post, this is a half-finished make at the moment. This would have been finished if I could find my ball of black crochet cotton but since I can’t, it’s currently string-less string art/thread art. eBay is providing a new (to me) ball of black crochet cotton so I’ll post finished pics (and better pics in general) when that arrives tomorrow/Thursday but, you know, Blogtoberfest2012 demands daily posts…! I’ve been wanting to try making some string art for a while but have always been put off by the idea of having to hammer in lots of little nails. Then I found Dina’s string art tutorial which uses corkboard so no hammer required and it’s pretty forgiving (I moved a few pins but with the naturally open cork texture, it’s hard to see the wrong holes). I was even lazier than Dina though and just used a cork noticeboard – £2 from Wilkinsons. They used to have ones in wooden frames but I prefer this apparently frameless type (there is a hidden frame structure, which makes it pretty strong and ready to hang). 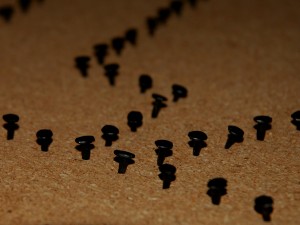 I’ve used 10mm (3/8″) cut tacks instead of pins – I tried panel pins but the test string slipped off them more easily and I like the mock-industrial dark metal look anyway. As I said, the string will be black too and when I’m stringing it, I’ll even up the heights/positions of all the tacks so it looks a bit neater in general (seemed little point in doing it now). 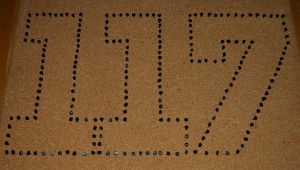 It’s our house number and will hang in the (very visible from the road) porch. The house exterior is currently dirty cream & green (bleugh!) but we’ve been meaning to re-do it since we moved in to (off-)white and black, and all the other stuff I’ve got in the porch is monochrome in anticipation of that. Hopefully this will both look good finished and coordinate well with the other stuff in there. If it doesn’t, well, at least it was quick, easy & fun — and I can take it all apart again to reuse in some other way.